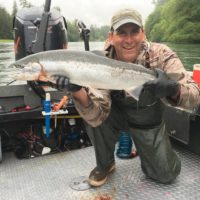 These rivers offer up some of the biggest steelhead in the state and have produced some world record steelhead.

During the Winter months, Dave offers guided trip targeting these fish offering his clients a catch and release adventure of a lifetime.

These are wild steelhead, which are endangered so retention is not allowed and anglers must adhere to best catch and release standards. remember to never remove a wild steelhead from the water, not only is it a danger to the fish, it’s illegal in the state of Washington.

Thankfully these Olympic peninsula river systems have healthy enough stocks of the fish, catch and release fishing is still allowed. Don’t miss your chance to take on one of these rare beauties and get a chance at a snapshot in time with one of the biggest steelhead the Pacific Northwest has to offer.

Call Dave Mallahan of Dave’s Guide Service at (360) 201-9313 and book your Steelhead fishing trip with one of the top Olympic Peninsula Fishing Guides in the state. Spots are limited so don’t delay or you may end up having to wait till next year.

This Ad has been viewed 39 times.